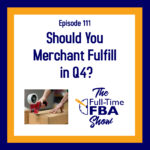 Today we’re going to be talking (rather uncharacteristically) about FBM, Fulfillment By Merchant, and whether you should merchant fulfill some of your inventory via Amazon in Q4. Although FBA is generally a better option than merchant fulfilling, there are times during the year, especially during Q4, where merchant fulfilling might be a good option. In